This Is Not A Wiki

You are here: This Is Not A Wiki » Croi's Games » Game Mechanics » Spell Points
croiduire:game_mechanics:spell_points

We will be using a spellpoint system to handle all spellcasting--magical or clerical--in this game. We believe it makes more sense than requiring a caster to pre-declare his memorized or granted spells; a PBEM universe lacks all the subtle clues which make intelligent advance spell selection practical. Spellpoints are also much easier for a DM to keep track of, and we believe most casters will enjoy the increased flexibility once they adapt to the new system. It will work as follows:

Now go to the Wisdom Ability Score table. Find your character's wisdom and look at how many bonus spells are allotted. Let's assume Kabonk the Blessed has a Wisdom of 17, and therefore he has been granted two 1st, two 2nd and one 3rd level spell in addition to the spells he receives as a 12th level cleric. (2x1)+(2x2)+(1x3)=2+4+3=9 bonus spell points. 65 level spellpoints+ 9 bonus spellpoints=74 available spellpoints. To cast a spell costs 1 spellpoint per spell level in the deity's major spheres, and 2 spellpoints per spell level in the deity's minor spheres. Kabonk the Blessed is a priest of Smite Axewielder, the God of War. His major spheres are All, Combat, Healing, and War; his minor spheres are Necromantic, Protection, and Wards. If Kabonk wants to cast Spiritual Wrath, a 6th level Combat spell, it will cost him 6 spellpoints. If he wants to cast Dragonbane, a 6th level Wards spell, it will cost 12 spellpoints. If he wants to cast Sol's Searing Orb, a 6th level Sun spell, he is flat out of luck. If he wants to cast Shadow Engines, a 7th level War spell, he is also out of luck--he doesn't have an 18 Wisdom. Spheres of Influence and Prime Requisite limits still apply, but notice that Kabonk has full access to all the spells in his minor spheres; they merely cost twice as much to cast. Finally, Kabonk can cast as many spells of whichever level as he has spellpoints for, during a given day, provided they are within his assigned spheres.

This time, find the character's level on the Wizard Spell Progression table and assign one point for each 1st level spell, two for each 2nd level spell, three for each 3rd, etc. Now go to the Wisdom Ability Score table. No, that is NOT a typo. Substitute the character's Intelligence score for Wisdom in the Ability Score column and proceed as above to determine how many bonus spells are allotted. Wizards get the same number of spellpoint bonuses as Clerics do (uses the same table), but it's based on their Intelligence instead. Let's assume Voodooienne the Conjurer is a 9th level mage with an Intelligence of 18. On the Wizard Spell Progression table she would have (4x1)+(3x2)+(3x3)+(2x4)+(1x5)=4+6+9+8+5=32 level spellpoints; on the Ability table (with Intelligence substituting for Wisdom) she would have (2x1)+(2x2)+(1x3)+(1x4)=2+4+3+4=13 bonus spellpoints. 32 level spellpoints+13 bonus spellpoints=45 spellpoints. Make sense so far? Good!

A traditional mage will be asked if he has a major and a minor from the traditional schools. The schools of traditional magic are Abjuration, Alteration, Conjuration/Summoning, Enchantment/Charm, Divination, Illusion, Invocation/Evocation, and Necromancy. (Yes, the 2e PHB divides Divination into Greater and Lesser. And this is why? Please disregard it--in this context there are only eight traditional schools!)

Visualize a clock face with Illusion in the 12 o'clock position, Enchantment/Charm between 1 and 2, Conjuration/Summoning at 3 o'clock, Abjuration between 4 and 5, Necromancy at 6 o'clock, Invocation/Evocation between 7 and 8, Divination at 9 o'clock, and Alteration between 10 and 11, like the chart in the PHB. If you declare as an Illusionist/Alterationist (Illusionist as major, Alterationist as minor) you will cast spells from those two schools at the cost of one spellpoint per spell level. The two adjoining schools on either side (in this case Divination, Invocation/Evocation, Enchantment/Charm, and Conjuration/Summoning) are accessible at a cost of two spellpoints per spell level. Spells from the schools of Necromancy and Abjuration are available at the cost of five spellpoints per spell level.

If a mage doesn't wish to specialize (major and minor) in a traditional school, he can cast spells from any of the eight traditional schools at the cost of three spellpoints per spell level (but still, no access to Wild or Elemental schools). If Voodooienne the Conjurer wants to cast Summon Shadow, a 5th level Conjuration/Summoning spell, she can do so at a cost of 5 spellpoints, provided the spell is in her spellbook. If she wants to cast False Vision, a 5th level Divination spell, she can still do so (again provided the spell is in her spellbook) at the cost of 25 spellpoints. Now obviously Voodooienne is not going to cast Divination spells too often--but she can if she must do so.

The schools must be contiguous. There is also a Universal school with spells that all Wizards must take (Cantrips, Read Magic, Detect Magic, and Wizard's Mark) as well as some spells that all Wizards MAY take (Find Familiar, Protection From Cantrips, Wizard's Lock, Dispel Magic, Enchant An Item and Permanency.) Permanency does not cost Con to cast; as in 3e it requires varying amounts of XP instead, depending on the target. 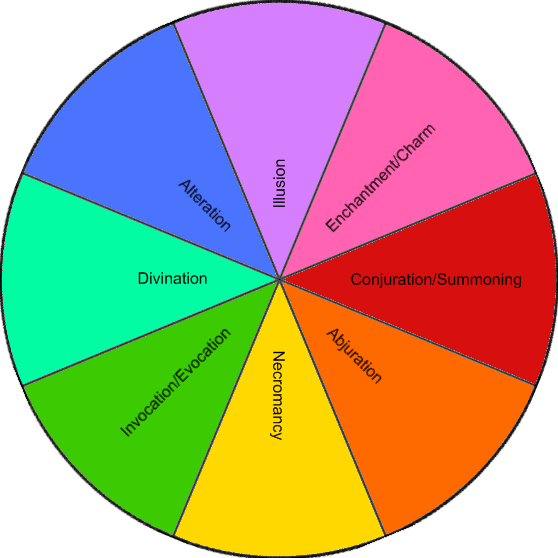 To learn a 1st level arcane spell requires 8 hours. None of these 8 hours need be continuous; however, time is only recorded in 15 minute increments, rounded down. For example, if a mage studies for 12 minutes, he has barely started to focus and learns nothing; if he studies for 50 minutes, he is credited with .75/hr.

Rather than requiring a character to spend the full study time and then discover that he cannot learn the spell (based on intelligence, as per the PHB), a player can roll after the first 8 hours of study. (Either the character is able to grasp the theory or he isn't…) Spells within the character's two target schools get a 10% bonus. For spells from the four flanking schools there is neither advantage nor penalty. Opposition school spells are learned at a 10% penalty. However, for each character level higher than the minimum level required to learn a particular spell a 5% bonus applies. For example, a 12th character level mage with a 16 Intelligence (70% chance to learn new spells) would need to roll 80 or less to learn a 6th level spell in his target school, 70 for a flanking school spell, and 60 for an opposition school spell. However, to learn a 1st level spell from a flanking school (70% + 55%) would be automatic, to learn a 4th level spell, available at character level 7, would require 95 or less (70% + 25%).

The total number of spells that a mage can inscribed into her spellbook=Intelligence x10, so Voodooienne, with her 18 Intelligence can inscribe a total of 180 spells (Cantrips counts as only one spell, no matter how many variations the mage knows). (There is no longer a maximum number of spells per level, however, Prime Requisite limits still apply.) If she wants to inscribe twenty 1st level spells she can do so, provided the lifetime spell limit of 180 spells of all levels isn't exceeded. This lifetime spell limit applies under all conditions, including if the spellbook is permanently lost, Voodooienne dies and is resurrected, etc. Once the limit has been reached, only a Limited Wish or Wish can be used to erase a once-inscribed spell from a Wizard's mind, to free up a slot for some other spell.

Other spellcasting classes: Paladins, Rangers, and Bards (to name three) have progressive spell-casting abilities as well. They would each use the same spellpoint system, but would not be entitled to any Ability Score spellpoint bonuses. Specific details will be described and implemented on a case-by-case basis.

Once a spell has been learnt, it takes 1d3+1 hours per spell level to transcribe it into the mage's spellbook.

To replenish their spell points and be able to cast spells, every mage and cleric of any race needs 6 consecutive hours of sleep, plus 2 additional hours of study or prayer every day (24 hours).

Except where otherwise noted, content on this wiki is licensed under the following license: CC Attribution 4.0 International